Mike Hoeflich
I am a professor at the University of Kansas School of Law and teach contracts, legal ethics and legal history

David Paul Brown, one of the most eminent nineteenth century American trial lawyers, was asked by an acquaintance how he found time to do so much labor. He answered:

A mere lawyer is a mere jackass, and has never the power to unload himself; whereas I consider the advocate—the thoroughly accomplished advocate—the highest style of man. He is always ready to learn, and always able to teach. Hortensius was a lawyer—Cicero an orator; the one is forgotten, the other immortalized.

From the biography of David Paul Brown, published in John Livingston, ed., Biographical Sketches of Eminent American Lawyers..., Part II  (April & May, 1852), 178 at 192.

Posted by Mike Hoeflich at 12:44 PM No comments:

The lawyer shuns their opinion who regard the professors of the law as an order whose interests are at variance with those of society at large, and therefore to be protected by walls and bulwarks raised in self defence. Lawyers were appointed to live for society, not society framed for them to live by. Hence in those rules which they make for their conduct towards one another and towards their fellow citizens, the lawyer regards those as of no binding force which clash with the welfare of society at large: and though to the other rules of his order he pays that deference which courtesy toward his fellow labourers in the work of justice demands, he ever remembers the good of society and the principles of equity whereby to relax their rigour...In all such matters the lawyer looks to the intent of the rule; and so the abatements he makes from the rigour of it be made in honour, with a clean conscience, without left- handed designs of self-interest or avarice, he cares not what censure he may incur from those who, considering the privileges of their order as of more value than the good of society for which alone that order exists, however wise they be in their own eyes, to others resemble the fool who arrogantly thought he played on the organ when he only blew the bellows.

Edward O’Brien, The Lawyer, His Character and Holy Rule of Life: After the Manner of George Herbert’s Country Parson (Philadelphia: Carey & Hart 1843) [first published in London by Pickering in 1842].

Posted by Mike Hoeflich at 2:05 PM No comments:

The Legal Antiquarian is back. After several years, the death of a spouse, and  the loss of the use of my legs, I have decided that it is time to bring this blog back to life. In doing so, I offer those of you who read this blog two new entries: one legal and one for for all of the academics among you who may have lost faith in what we do amid the madness of our current existence.

For the lawyers and legal antiquarians:

A proclamation was issued in the twentieth year of James the First, in which the voters for Members of Parliament are directed “not to choose curious and wrangling lawyers, who seeke reputation by stirring needless questions.”  A more favourable disposition to the professors of this “honourable science: appears to have been entertained by Aleyn, in his History, printed in London, 1638.

A prating lawyer (one of those which cloud

That honour’d science) did their conduct take:

He talked all law, and the tumultuous crowd

Thought it had been all gospel that he spake.

At length these fools that common error saw,

A lawyer on their side, but not the law.

And for the professors of the law (and all other subjects):

From,  Frederick Hall, Eulogy of the Late Solomon Metcalf

Literary men, says he, I refer particularly to instructors in colleges, although they are not adorned with that splendor, which is attached to military exploits, and which like the lightning, dazzles and dies, exert nevertheless, upon the mass of the community a secret, but very extensive and powerful influence. No body of men, of their number, unless my notions are very wild, sustain equal responsibility or possess equal means of corrupting, or improving the publick sentiment. Their opinions on political, or moral, or religious subjects, will, for the most part, be transfused into the minds of their pupils, and “grow with their growth, and strengthen with their strength.” The influence, exerted by these pupils, will be felt more or less strongly in every town and every village in our land.

Posted by Mike Hoeflich at 10:30 AM No comments:

A Lawyer with Quill at his Desk 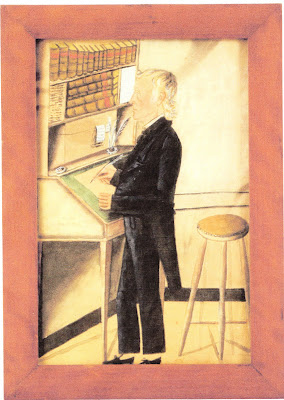 The portrait of an attorney, above, is by Jacob Maentel, a noted antebellum American folk artist. The details illustrate a crucial aspect of an early American lawyer's office: document production. First, we may note the two shelves of law books, including several folio volumes on their sides. These are most likely imported English or European law texts since American law books of the period, with very few exceptions, were issued in quarto or octavo and not the larger, more expensive folio format. The lawyer stands at his desk, as was not uncommon, but we also see the hgh stool which he--or his clerk--would have used if the document was long. Finally, the lawyer is using a sharpened quill pen. Steel nibbed pens did not become common until the second half of the nineteenth century. One might also note that in the United States Supreme Court today, quill pens are furnished to the lawyers, although these tend to be taken away as prized mementos rather than put to practical use.
The portrayal of the lawyer standing at his desk penning a document is typical of "occupational" portraits of the period, although in reality it was usually a clerk or professional scrivener who would have copied most documents.
Posted by Mike Hoeflich at 5:04 PM 37 comments:

Getting the Work Out Well, I've taken a number of weeks off but school will soon be upon us and it's time to add posts to this blog. The next several posts will concern the ways in which nineteenth and early twentieth century lawyers handled document production. In the days when "typewriter" referred to the person working the machine and in which traditional law offices still produced hand written documents, the choice of ink was a major issue. Several companies marketed their own brands of ink specially for the legal profession. Among these, Sanford was a leader. They produced ink in various colors, including blue, black, and green and advertised that these inks would be permanent and not fade, a characteristic necessary for legal documents. Typical writing inks, based on an iron gall formulation, would over time actually lose their color. As a result, many documents would fade to the point that the writing appeared light brown, which was the color not of the original ink but the ferrous compound left after the ink had faded [i.e. rust]. Permanent inks would not deteriorate in this way. The illustration is of an early postcard sent by Sanford to law firms.

Posted by Mike Hoeflich at 1:24 PM No comments:

A Humorous Advertisement for Legal Services I have recently been revising my chapter on the ethics of legal advertising in the Kansas Bar Association's Handbook of Legal Ethics. Consistent with my personal inclination towards legal antiquarianism, I could not stop myself from doing some research into nineteenth century American lawyer's ads. Among those I found one, in particular, stood out: an advertisement placed by Calvin Fletcher and J.A. Breckridge in the Indianapolis Gazette, which ran from March 22 to May 17, 1822. In my opinion, this advertisement should win the all-time prize for truth in advertising. The text of this ad is to be found in Gayle Thornborough, ed., The Diary of Calvin Fletcher, vol. 1 [1817-1838] (Indianapolis, Ind.: Indiana Hist. Soc. 1972).

Posted by Mike Hoeflich at 3:39 PM No comments:

A Beer to Fill Your Stein In an earlier post I discussed the Mettlach lawyer stein. On a trip to my local liquor store yesterday, I found the perfect beer to fill that stein. It's called "Collaboration Not Litigation Ale" and it's produced by Avery Brewing Co. in Boulder, Colorado. Not only is the ale quite good, but the label is one every lawyer should like. Indeed, I think that every law school class in ADR should have this as the official class brew. And, perhaps, in states like Kansas, which require mandatory ADR in certain cases, the parties ought to partake of this ale as a prelude to their negotiations.

Posted by Mike Hoeflich at 1:12 PM No comments: